A Timeline of Viking History - a time of mighty heroes, epic battles, and brave journeys.

A.D. 436, This is the time of the legendary Sigurd the dragon slayer. Son of hero Sigmund and leading figure in the Volsung saga. Also known as Siegfried.

480, King Hadding of Denmark. Raised by giants he fought many a great battle. His tale is filled with fantastic creatures and magic.

520, Beowulf. Perhaps the most well known of the Viking heroes. Known mostly for killing the wicked Grendel.

550, Hrolf Kraki. Hrolf is another legendary King of Denmark. His tale is filled with berserkers, witches and all manner of creatures.

793, on the eighth day of June the Vikings sacked the monastery of Lindisfarne on the east coast of England. This was the beginning of the Viking Age.

The Viking Age would not have been possible without their incredible longships. These great ships were not only extremely seaworthy, but they also had a shallow-draft that allowed them to go deep up river. This allowed them to travel far and wide for trade and raid. 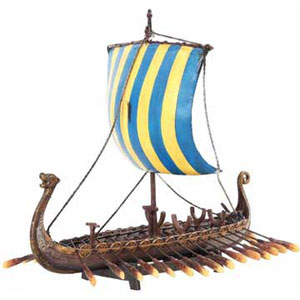 The scholar Alcuin said, "Never before has such a terror appeared in Britain."

795, the Vikings sacked the Irish monastic foundation on Iona. They attacked again in 801, and once more in 806. The survivors fled to the Irish mainland.

799, Aquitaine is raided by Vikings. 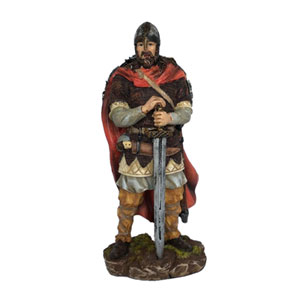 800, coastal defenses are organized by Charlemagne.

810, Frisia is ravaged by the Danish king Godfred.

815, Floki of Rogaland set out from the Faergoe Isles and discovered Iceland.

822-823, Archbishop Ebo of Rheims undertakes a mission to Denmark.

832, Vikings raid Armagh in Ireland three times in one month.

835, The Oseberg ship burial in Norway.

837, 60 Viking longships entered the mouth of the Boyne and another 60 sailed up to Liffey. The Vikings devastated Ireland by ravaging her churches, sanctuaries, and her shrines.

839, the Norse leader Turgeis led an impressive army into the north of Ireland, conquering Ulster, and founding the harbor-stronghold of Dublin.

843, Norwegians plunder the town of Nantes in western France. They then sailed up the Loire as far as Tours and attacked the whole of France.

844, a group of Danes sailed up the Guadalquivir and attacked Seville.

845, The Vikings defile the shrine of Clonmacnoise. Ota, the wife of the Norse leader Turgeis, performed pagan rites on the high altar. Turgeis later took the settlement of Armagh and proclaimed himself king. The Irish later captured him and drowned him in Loch Owel.

845, Vikings threaten Paris and are paid a tribute of bullion worth 7,000 pounds of silver not to attack. Ragnar Lodbrok may have lead this army.

851, Danish Vikings land in Ireland and join forces with the Irish to become the rulers of Ireland.

853, Olaf and Ivar, two sons of a minor Norwegian ruler, established a Norse kingdom in Dublin. This kingdom lasted for more than two centuries.

859, the Danish chieftain Hastein joined forces with another Viking leader and led a fleet of 60 dragon ships through the straits of Gibraltar and raided Algeciras and the coasts of Morocco.

860, Hastein led his fleet to Italy and sacked Luna, a town that no longer exists.

862, Varangian Rurik founds the Rurik Dynasty that would go on to rule the Kievan Rus.

865, Ragnar Lodbrok is killed by King Aella of Northumbria.

865. Great Heathen Army lead by the sons of Ragnar land in East Anglia.  Halfdan, Ivar the Boneless, Bjorn Ironside, Hvitserk, Sigurd Snake-in-the Eye, and Ubba are the sons often associated with the army.

876, Rollo, also known as Rolf the Ganger's first arrival in the Seine.

882, Bjorn Eriksson is king of Sweden.

891, Battle of Leuven.  The Franks defeat a Viking force that had a fortification near Leuven.  Leaders Sigfried and Gotfried died in this battle.

The Gjermundbu helmet is dated to the later 9th century and was found in Norway. 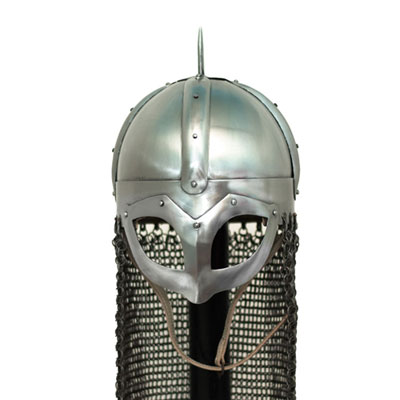 900, Olof the Brash is a king of Denmark.  He was likely Swedish and defeated Helge.  This is the beginning of the House of Olof.  His sons Gyrd and Gnupa would become kings after his death.  Gnupa's son Sigtrygg Gnupasson would be the last of the House.

907, Swedish Viking Oleg the Wise led an army of eighty thousand men and two thousand ships to Constantinople. Panic-stricken, the Byzantines paid a large tribute and agreed to a commercial treaty.

910, birth of Egil Skallagrimsson in Iceland.

911, Rollo becomes the first ruler of Normandy after agreeing to help protect the French from Viking raids.

917, Harthacnut I becomes king of Denmark when he deposes Sigtrygg.

931, death of Rollo, or Rolf the Ganger, founder of Normandy.

936, Gorm the old becomes king of Denmark upon the death of his father Harthacnut I.

940, Erik Ringsson is king of Sweden.

950, Emund Eriksson is king of Sweden.

960, Harald Bluetooth founds the Jomsvikings and makes Palnatoke their leader.

961, death of Hacon the Good after the battle on the island of Stord.

982, Viking chief Erik the Red, accused of a cold-blooded murder, is banished from Iceland for three years. He set sail for the west and finds Greenland.

992, Leif Erikson, the son of Erik the Red, leaves Greenland with thirty-five men in search of another land. He lands on Labrador and becomes the first European to discover America.

995, Olof Skotkonung, son of Eric the Victorious becomes King of Sweden.  Considered the first king to rule the Swedes and Geats.

1028, Cnut the Great invades Norway and becomes king.  He is now the king of Denmark, England, Norway, and part of Sweden.

1030, St Olaf is killed at the battle of Sticklestad.

1035, death of Cnut the Great.  His son Harthacnut becomes king of Denmark.

1042, Magnus the Good becomes king of Denmark when Harthacnut dies.

1043, King Magnus I attacks and destroys the Jomviking fortress at Jomsborg.

1046, Harald Hardrada becomes co-king of Norway with his nephew Magnus the Good.

1066, Norwegian king Harald Hardrada leads an army to invade England, but is killed at the battle at Stamford Bridge near York. The English king Harold Godwinesson is himself killed three weeks later at the battle of Hastings against William, duke of Normandy who was crowned king of the English on Christmas Day.  William would become known as William the Conqueror.  This marks the end of the Viking Age.  Not long after the Battle of Hastings, the Bayeux Tapestry was created.  It depicts the events leading up to and the great battle, it is 20" tall and 230 feet long.  Here is a small part of it:

1070, Danish king Sven Estridsson arrives in Humber to claim England. King Williams defenses were too strong and he was forced to withdraw in the summer.

1179-1241, life and death of Snorri Sturluson, author of the Prose Edda and Heimskringla.

1904, Oseberg ship found in Norway.  One of the most significant burial finds.  Included a fantastic ship and many other amazing goods.  Dated to about 834.

1939, Sutton Hoo ship find in Suffolk.  Dated to the early 7th century.  Appears to be related to items from the Vendel finds in Sweden.

1960, evidence of Viking settlement is found at L'Anse aux Meadows in Canada.

Note: many of the dates are approximate.