Viking finds always include hoards of Viking Jewelry and coins from all over the world. Brooches, earrings, pendants, necklaces, torcs, and rings made with incredible craftsmanship have been found. Thor's Hammer pendants were a favorite of the Viking warrior as it represented the mighty Mjollnir hammer of Thor. We stock a great selection of items for men and women based on authentic originals. Made from silver, bronze, steel, pewter, horn, bone, and iron. 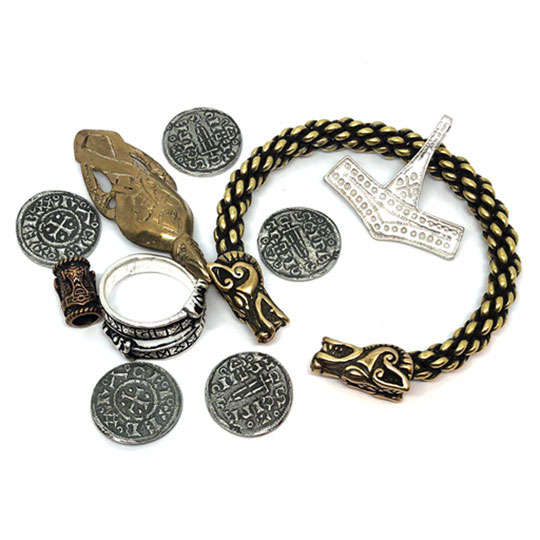 While the Vikings are most known for being warriors and raiders, they also made lots of amazing jewelry. Most of their jewelry was made from silver or bronze, but iron, gold, and bone were also used. Not only is their jewelry beautiful, but it opens another window we can use to learn about them. Just what was the jeweler depicting? Our Valkyrie brooch for example most likely depicts a Valkyrie offering a drinking horn to a great warrior or perhaps Odin himself. Other items depict animals like wolves, ravens, and even dragons. Some of them likely depict the Norse gods themselves.

The quality and quantity of jewelry worn by a person told much about their status. Those of higher status would have more jewelry made of silver or gold. Those that were more common might have more bronze, iron, or bone jewelry. It is also believed that silver arm rings were used as currency. Pieces of the band would be cut off to pay for items.

Men and women had lots of different ornaments they would wear. Some like the Thor’s Hammer pendant were likely worn by both, while tortoise brooches were specifically worn by women.

Jorvik, Oseberg, Hedeby, Uppsala, Bornholm, and Birka are all sites with lots of Viking finds. These were important places during the Viking Age.

The different art styles can often be seen in their jewelry, these styles were Oseberg, Borre, Jelling, Mammen, Ringerike, and Urnes. The style can be used to date the piece.

Viking finds are filled with all sorts of jewelry including brooches, pendants, bracelets, rings, arm bands, torcs… We stock broad range of these items which you can view above.