Thor's Hammer pendants were very common during the Viking Age.  Thor was one of the most popular of the gods.  Many stories tell of one giant or another trying to bring down the gods and Thor ultimately stops him.  This makes Thor the protector of the gods and mortals alike.  His most prized possession was his mighty hammer Mjolnir.  When thrown at a target Mjolnir would magically return to him.  It is Thor's powerful hammer that becomes the symbol of Thor and is worn as a symbol of protection.

There have been many Thor’s Hammer pendant finds throughout Scandinavia. Above you can see replicas of many of the beautiful designs. It is believed by many that these amulets were a response to the Christian cross pendant. Some pendants like our wolf hammer found in Iceland are a combination of hammer and cross. There is also a famous soapstone mold found in Denmark that appears to have been used to make hammers and crosses.

Most original hammers were made from silver, bronze, or iron. Some are incredibly detailed and others very plain. The material and detail of the pendant probably told much about the status of the owner.

A great symbol of the heathen Vikings. 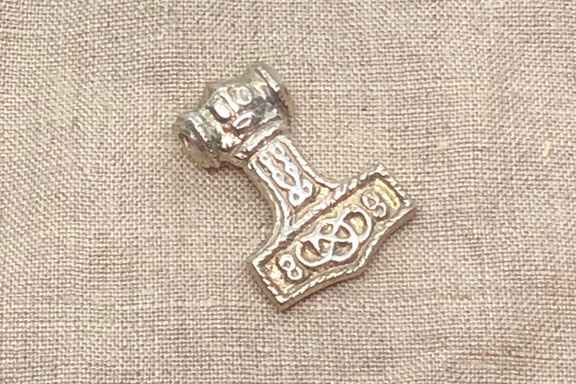 Mjolnir (also spelled Mjollnir) is the main weapon of Thor and became a symbol of his worship. When thrown at an enemy it would always return to his hand. It was created by the dwarven brothers Brokkr and Sindri as part of a bet with Loki. Trying to win the bet Loki harassed the dwarves while they worked causing the weapon to have an abnormally short handle. It was still the greatest of weapons used many times to slay giants and other foes of the gods.